A Reunion 2009 meeting was held on Saturday, January 10 at the home of Sue Camaraire. In attendance were: 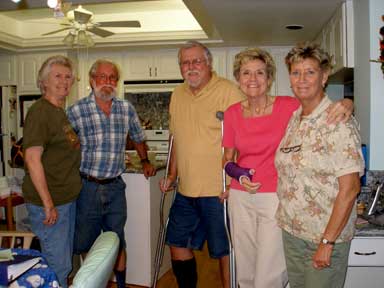 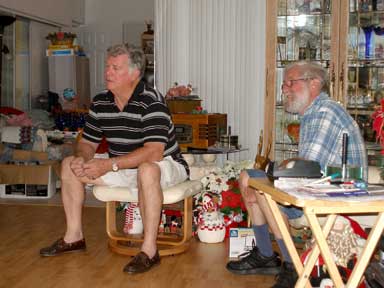 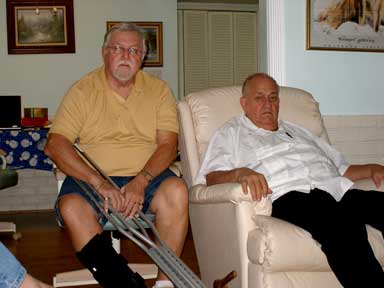 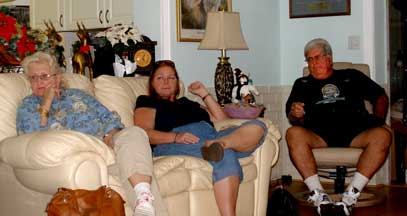 AND.... Dixie Joyner , in town for the cruise, dropped by for a few minutes.

Doug reported that he would finalize the number of rooms at the hotel and give them the down payment based on that number the last week of January.

A lengthy discussion ensued regarding event decorations. It is the consensus of the committee that we spend as little as possible. Bev Weiss Shaffner volunteered to check out prices.

Myken Brady sent out announcements to approximately 25 faculty members. Only 2 had responded by the meeting that they would be interested in attending. A discussion ensued regarding the possibility of inviting them as our guests. Bev Weiss Shaffner made a motion to allocate $500.00 toward that cost. Motion carried unanimously.

Mickey and Walt have been working closely with SHS principal Deborah Owen regarding the Saturday memorial service and suggested that we invite her and the 2 assistant principals who are also helping to attend the Friday night event as our guests. Bev Weiss Shaffner made a motion to allocate $105 for that purpose. Motion carried without dissent.

It was suggested that we remind people who aren't staying at the hotel that parking will be an additional $10 per day. This is included in the package price for those staying in the hotel.

Some people have been inquiring about the attire for the week-end. It will be "Florida Casual." There will be no "formal" designation for Saturday evening.


A Reunion 2009 meeting was held on Saturday, August 23 at the home of Sue Camaraire. In attendance were: 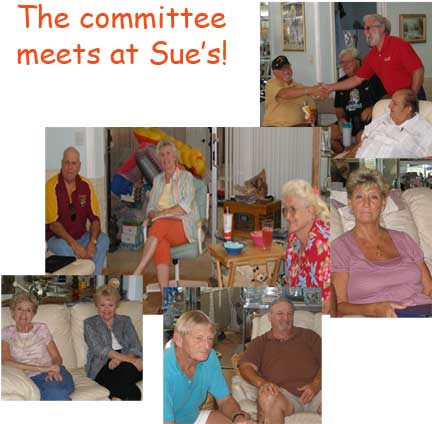 A special note: Walt and Mickey came all the way from Lake City for the meeting and Ann came from Tampa!! What great SHS spirit!!

Doug Wilson opened the meeting and called upon Mike Roland regarding the Reunion tee-shirts. Mike reported that the shirts are ready and showed one to the group. They are in royal blue with an orange dragon insignia and the words "Stranahan High School Reunion, 50th Year."

Walt and Mickey Hanes Lee met yesterday with Debra Owens, principal of Stranahan regarding the planned tour, memorial service and tree planting to be held at Stranahan on Saturday, June 13. Ms. Owens says SHS will be open for us on that day and she will even provide student assistants to serve refreshments. She also has 3 school buses which will be available to transport attendees from the hotel to Stranahan for the program. The group approved a time for the program of 2 - 4 PM with buses leaving the hotel at 1:00 PM and returning by 5:00. Details of the program itself will be worked out closer to the event.

Mickey and Walt are doing a great job of trying to locate classmates and have contacted more than 700!

Bev Hoppe reported that we have approximately 75 people who have sent in Registration Forms - but not as many have sent in deposits.

There was some discussion about entertainment - what kind, if any is necessary. The possibility of a talent show utilizing classmates' talents; it was suggested that we have a few songs by the members of the Stranahan Singers who attend, possibly persuading Peggy Joyce Barber to attend and lead the singing. Doug likes the idea of having a juke box so people could choose songs like in the old days; it was brought up that people may prefer to enjoy the dinner hour on Saturday night without the interference of loud music.

An e-mail notice will go out in a month or so to remind everyone of the November 1 deadline for the first 50% payment.

The next meeting will be on Sunday, November 2, 2:00 PM at Sue Camaraire's 's once again.


Here they are! The Registration and Directory Forms for Reunion 2009.

There are 4 different ways to register:
#1 - go to Reunion 2009 Registration Form. This is a .pdf document.

Or, #4 - There is also an online form which you may fill out, copy, and e-mail or print and snail-mail. For this one, go to the Registration page: Reunion 2009 Registration.

Because many classmates have moved during the past 8 years, Walt and Mickey Hanes Lee(Classes of '59 and '61 respectively) have been trying to locate classmates and have already found quite a few. If you would like to help with this effort, please let them know and they'll assign each volunteer a few names at a time from the last directory. Contact them at yardsaler2@hotmail.com

Congratulations to Bev Davis O'Brien, Class of '60, who is the very first person to send in her registration! We received it today!! Way to go, Bev!! She got her form at the mini-reunion in Sebring which was attended by approximately 100 classmates from '59 through '62.


Sorry it's taken so long to get back to you with the latest on Reunion 2009.

Doug finally met with the people at the Bahia Mar Beach Resort and Yachting Center - formerly the Radisson Bahia Mar - and they finally agreed upon a date:
June 12 - 14, 2009

For those who hoped it would be earlier, I can only say we did the best we could taking all things into consideration. If it makes you feel any better, it's still hitting as high as 89 here on some days in the middle of winter!

This includes a room for 2 nights; Friday night event, Saturday night event, one directory and one tee-shirt for each classmate. Sunday breakfast is not included as the price for that had risen so dramatically, it seemed prohibitive. For those who want to have breakfast together on Sunday, we'll make other arrangements.

If you are interested in an installment plan for payment, please let us know.

The next step is locating as many classmates as possible for this reunion. Walt and Mickey Hanes Lee have been working steadily to locate classmates and have located quite a few. If you would like to help with this effort, let me know and I'll assign each volunteer a few names at a time from the last directory.

The Registration form with all the individual event prices is under construction and should be available soon.


Several of you have written to see what's been happening during the summer. In a nutshell, we seem to have hit a brick wall in that the Radisson is being very strange and uncooperative. They just won't give us any room prices for any months except June, July and August, 2009 ($119 - $129 per night)! They keep saying the months of April, May, September & October are more expensive. I've e-mailed them and Doug Wilson has called several times and they are pretty much ignoring us! Doug and I have been down there twice to meet with reps. The first time the person didn't even show up! It's as if they really don't want our business. This has been going on all summer!

The plan was to get prices for rooms as well as food prices for Friday and Saturday evenings and Sunday breakfast and come up with a package price to present to the committee at a meeting as well as a rep from First Class Reunions to see if they can compete. Because the only time they seem to want us is the summer months and the committee wanted to try for spring or fall, we've been stymied.

We might be able to find a more receptive hotel away from the beach, but we realize that many of you prefer to be at the beach - in walking distance of the Elbo Room. And since we're expecting a fairly large group, there are very few hotels that can accommodate us. We seem to be between a rock and a hard place. We haven't given up, but we are getting frustrated.

Stay tuned! We are hoping to work it out soon.

Committee gathers at the Radisson.....Greeted by Class of '62's Buddy Dewar.....Orange & Blue balloons